Siena definitely has a strong bond with mysticism, as it is the home of important figures of Catholic religion like Saint Catherine and Saint Bernardino.
The name of our own hotel situated right outside the gates leading to Rome, recalls this unique woman. The mysticism that inspires Saint Catherine is one of the reasons why people come to visit Siena and see with their own eyes the places that hosted this saint through a long period of her life.

Bagno Vignoni and the Orcia Valley, a difficult period

Since she was a child Saint Catherine of Siena clearly felt the faith in Christ weighting on her. When she was only 6 years old she had her first mystic vision of Christ seated in glory with the Apostles Peter, Paul and John. Soon after, she vowed to devote her whole life to God, her parents tried to dissuade her, first suggesting her to marry the widower of one of her sisters, and then by taking her away from Siena to Bagno Vignoni, in the Orcia Valley. This incredibly beautiful area, declared UNESCO world heritage in ***, brought her no relief.
Her parents strongly wanted to make her change her mind, but, not only Catherine refused to turn back, but also she fell seriously ill. She entirely restored only when her mother had her admitted to a local association of Dominican tertiaries (called the “Mantellate”).

A life dedicated to the others

She kept on living with her family giving away as often as possible, the goods they owned while taking anything for herself.
When she was only 16 years old she started a massive fasting, a practice she will be carrying out for her whole life, and that, maybe, would be one of the causes of her premature death. Her frugality and abnegation showed up in any aspect of her life, even while she was sleeping, as she chose to use a pillow made of stone, that is still visible in the house-sanctuary situated in the centre of Siena.

The Santa Maria della Scala, the dome and the legend

Her commitment in helping the infirm is renown and for the time she spent in Siena she dedicated herself to the cure of the ill people volunteering as a nurse in the biggest Medieval hospital of that time, now a museum: Santa Maria della Scala of Siena.

One day, while she was walking from her own house to the hospital she fell on the step of a steep staircase going aside the Cathedral of Siena, and leading to the square right in front of the hospital. The legend says that on that day while she was stepping up, she had a vision of the devil peering out of the window of the Cathedral dome. Upset and, maybe, disturbed by the skills of the adversary she slipped and lost most of her teeth on the stair, each tooth engraving the marble of a step.
In a 15-minutes’ walk you’ll get to the Cathedral from our hotel and you can check yourself if on the steps of that very same staircase are still recognizable signs of the Saint’s teeth.

Fontebranda and San Domenico church, the life of a saint as a Siena citizen

Another name for Catherine, known at least in Siena, is “La Santa di Fontebranda” (literally “the Saint of Fontebranda”).

Fontebranda is spring located below the church of San Domenico, not too far from the house of Saint Catherine, where she used to go and get some water.
Sometimes we tend to forget that even though great preacher dedicate their whole life to God and things concerning events mostly situated beyond human life, they’re human beings too.
This pet name, at least, proves a part of Saint Catherine’s “normal” life: a woman simply walking through her city and taking water from a spring.

Walking through the streets of Siena you may find yourself walking into the same places and watching the same panoramas that St. Catherine used to: Via del Costone (where she had her first vision), her house, Fontebranda spring, the Cathedral and the hospital of Santa Maria della Scala (now restored and used as a museum) and the church of Saint Domenico, where she probably went many times and where now lies her head in a chapel dedicated to her, taken from Rome where she was buried.

The iconography of Saint Catherine often represents her with a rose, and this particular flower is linked to the figure of the Sienese saint by a legend. Caterina died in Rome on April 29th 1380, at the age of 33. Her head was stolen by some Sienese citizens that believed she would have liked that her body (or at least a part of it) would be resting in Siena. But, while they were escaping from Rome a soldier stopped them and asked them to open the sack where the head was hidden. They prayed Catherine to help them out and what the soldier found in the sack was just rose petals, but as they arrived in Siena the head was right where they left it.

In 1999, Pope John Paul II made Saint Catherine one of Europe's patron saints and in 1970 Pope Paul VI gave Catherine (and Saint Teresa of Ávila) the title of Doctor of the Church, a praise for her theological consideration.
Saint Catherine of Sienna is definitely a religious figure of strength and one of the most brilliant theological minds of her day. 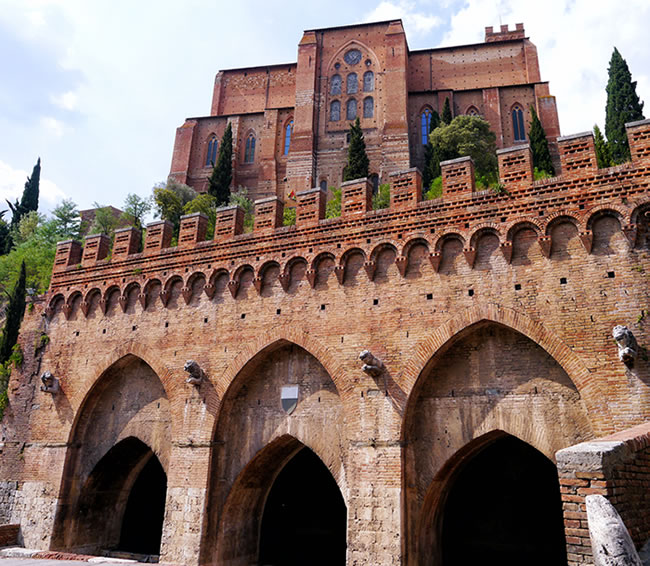 If you’re interested in a tour of the city or want to visit the area surrounding Siena, you can book a tour at the hotel reception or have a look at the tours available now.

“Great location, lovely view, clean and comfortable room, secure parking. But most of all the friendly and helpful staff, for whom nothing was too much trouble. Thank you - we'll be back!”

“We took a weekend in Siena, spent two nights and long mornings in this hotel. The place was peaceful, perfectly clean and cosy. Loved friendly and available personnel and more than anything, enjoyed the morning coffee in their beautiful garden with a view”

“A beautiful hotel with brilliant views of the tuscany region. The staff were incredibly helpful and friendly, particularly Lucho. The breakfast was excellent and all you can eat. Parking is convenient and very safe which was ideal for us.”

“Lucio in reception was extremely friendly and helpful. Could not do enough for us. Lucio was efficient, professional and exceptional at his job and he made our stay an extremely pleasant experience”

“Staff were great and very accommodating. Breakfast was lovely and the view from the garden was increible. Rooms were spacious and clean. 10 minutes walk through the lovely streets to the centre. Great location”

We care about your health